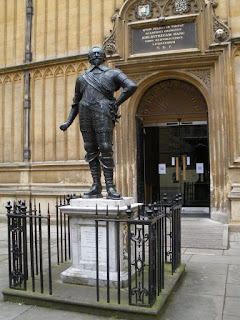 Aka, William Herbert, Earl of Pembroke. Known to the Bodleian Library -- location of this imposing bronze statue -- as one of its earliest benefactors. Known to early modernists and Shakespeareans as one of the dedicatees of the Shakespeare First Folio. Known to women's writing specialists as the son of Mary, Countess of Pembroke, and the lover of Lady Mary Wroth.

When I lived in Oxford, a certain gentleman of my acquaintance used to make appointments to meet his friends 'at the portly earl'. Usually this worked well, since many of his circle were hardworking postgrads who spent a lot of time in the Bodleian. But one person, knowing the gentleman's other habits, spent an increasingly puzzled hour searching the pubs of Oxford before realising his mistake.

I was in Oxford today on a short research visit. The Bodleian has recently been undergoing extensive renovations (the doors behind the statue, for instance, are new). But the Portly Earl survives it all.
Posted by Gillian at 18:17