One Book Leads to Another 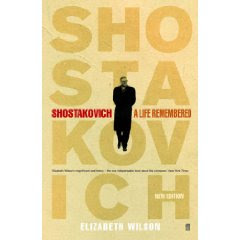 In a previous post, I mentioned I'd been reading Alex Ross's The Rest is Noise. The same friend who gave me the Ross for Christmas has now given me a copy of Elizabeth Wilson's Shostakovich: A Life Remembered. Perhaps this posting should have been entitled 'One Kind Deed Leads to Another'. When I told my friend how much I'd enjoyed the Ross, I remarked in passing that I wanted to follow it up by reading the Wilson, which has been on one of my unwritten reading lists since it was first published in 1994. The gift ensued. (Utterly undeliberate on my part, I hasten to stress.)

One good thing about waiting so long to read the Shostakovich book is that in the meantime (2006) a second, expanded edition has been published. And I've also bought more Shostakovich CDS. So -- even if Elizabeth Wilson, unlike Alex Ross, doesn't have a snazzy website -- I can still listen to the music and try to work out what she's talking about.
Posted by Gillian at 21:06