Bookshops I have known 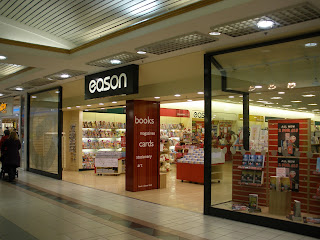 When I was in Ireland last weekend, I took this photograph. Eason's, in case anyone doesn't know, is an Irish institution. It was founded in the early nineteenth century, and has been trading under its current name since 1886. It's a bookshop, newsagent and stationer's, not unlike W. H. Smith's in England, though the flagshop branches in Belfast and Dublin are more comparable to a good Waterstone's. The other branches vary in quality and character.

What you see in the photograph was my own local branch of Eason's when I was growing up. It's very much at the 'newsagent and stationer's' end of the spectrum, but nonetheless was the only bookshop for miles around in those days (and indeed still is). This is where I bought, or had bought for me, my Enid Blytons, my E. Nesbits, my Joan Lingards. Later, it was where I bought my first Orwells and Brian Moores.

Since those days, of course, the process of buying books has changed greatly. I tend to buy most of my books nowadays from Amazon or ABE. Many books, as we know, are also now available online; but I've blogged on Olia about the intellectual problems associated with, for instance, the texts supplied by Project Gutenberg. Quality control is still an issue with electronic texts, as it is with so much on the Web. A book that can be obtained quickly and easily online may please students who are short of cash, but may be very shaky on textual grounds. Also -- a point that carries more conviction with students -- it is likely to be unannotated, which may leave them at a loss with some of the literary and cultural references.

Did I buy a book in Eason's last Saturday? Yes, of course I did: Q and A by Vikas Swarup -- the book on which Slumdog Millionaire is based. I doubt I'll catch the film in the cinema, but it's just possible I'll have read the book before the DVD comes out.
Posted by Gillian at 14:04