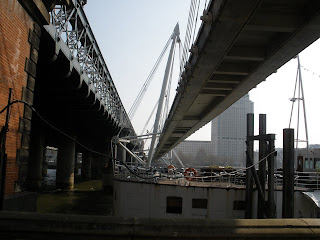 It's been a busy weekend by my standards. Dinner with friends on Friday evening. Then on Saturday, a trip to London to see the Van Dyck exhibition at Tate Britain.

I was on the Tube and about to change at Oxford Circus when I heard an announcement that the Victoria Line -- the only Tube connection to Pimlico, for the Tate -- was closed. After a few bemused minutes, it dawned on me that it would probably be easiest just to walk the last bit of the journey, from Embankment to Millbank.

I love walking in London, and conditions were perfect on Saturday morning. This is the first of thirty photographs I took after emerging from Embankment; and I found it quite difficult to choose just one for the blog since the whole riverscape was so photogenic and glowing with Spring. It shows the side of the Hungerford Bridge, the underside of the eastern Golden Jubilee Bridge, and a glimpse of the south bank.

The Van Dyck exhibition was fascinating. I'd seen another big exhibition of his works, at the Royal Academy in 1999 (can it really be 10 years ago!), and this one wasn't quite as much of a revelation as it otherwise might have been. The most interesting rooms, for me, were the first two, where Van Dyck's paintings of Charles I and his courtiers were hung alongside the work of his predecessors, such as Mytens and Jansson. It's no criticism of Mytens and Jansson to say one can see why Van Dyck got his job at court.
Posted by Gillian at 09:10