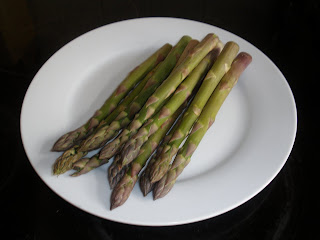 I discovered the pleasures of asparagus* some eight years ago, when I was on holiday in Dresden. I'd never really thought much about asparagus before, and certainly hadn't registered its coming into season as a noteworthy cultural event. But everywhere I went in Dresden, restaurants were advertising special 'Spargel' menus to take advantage of the new crop. (I even had to look up 'Spargel' in my German dictionary.)

Now I am a confirmed asparagus eater, and look forward to its arrival in the greengrocer's every year. I bought my first asparagus of the season last weekend, but ate it all before I thought to blog about it. (Half the bunch was eaten with bacon and white crusty bread for lunch; the other half formed the basis of an asparagus risotto at dinner.)

The asparagus pictured here is my second bunch of the season, purchased at Warwick market yesterday morning -- along with some Cotswold bacon and locally-baked bread. The asparagus season doesn't last long, so I'm enjoying it while I can.