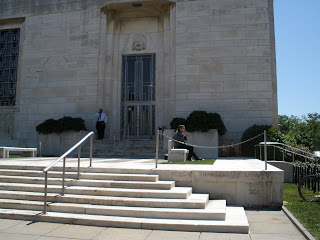 As some of you already know, I spent 10 days earlier this month at the Folger Shakespeare Library in Washington. The Folger is a familiar name to anyone working in early modern studies, especially literary studies, and perhaps the real surprise is that this was my first visit. But, oddly, this year is the first time I've needed to work directly on Folger manuscripts, and thus have been able to make a cogent case for research funding. A successful application to the British Academy was critical in making this visit possible.

One of the hardest things in organising this visit was choosing the right time for it. The money all had to be spent between July 2009 and June 2010, and because of other commitments the two most obvious times for the journey -- last September and the Easter vacation -- weren't possible. As a result, it was very difficult to find a 10-day period when I could reasonably be away from the department. The time I identified fell between the start of the summer term, when I had to hold a revision lecture and several seminars, and the start of the exams. I was concerned in advance about whether it was really a good idea to be away from the university during this rather tense period.

My view now -- having come and gone, survived the volcano and coped with all those anxious student questions -- is that I could hardly have been away at a better time. Being so far away, and on a funded trip, meant that time which otherwise might have been spent inefficiently on email and admin had to be stewarded for research. I also don't underestimate the beneficial effects of Washington sunshine just before the stressful exam period. I'd recommend it (or the equivalent) to anyone.
Posted by Gillian at 18:05